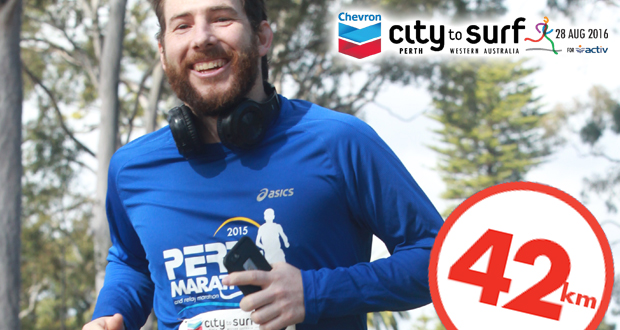 Well, what a sensational weekend this turned out to be! The 2016 Perth City to Surf Marathon (this being my 6th marathon) has been one of my favorite runs thus far! I normally wouldn’t write up so much on an event that I’ve done time and time again, but this one I feel needs sharing!

Initially I wasn’t going to run as I’ve not had the usual endurance race event bombardment that August often brings, and still suffering overstretched hamstrings resulting in a hyper-flexing knee from the 15.5hr paddling at the Avon Descent this year I figured it was best maybe to sit this one out. It’s always possible to give events a crack and playing the field by ear, and sometimes you’ve gotta be smart and diligent about your decisions. So the Thursday before the race, Rob Bullen (one of the trainers at work) comes to me with a video article of “The Iron Nun”; Sister Madonna Buder – an 86 year old female nun who took up running at the age of 47, and effectively started competing in Iron-Man competitions at age 53. The 86 year old/46 time Iron-Man finisher challenged my views at that point about where I was and how I felt at the time, and persuaded me that my excuses for not participating were pathetic. One does not have to race to finish, but those who don’t participate earn and learn nothing. Anything is possible if you give it a go, and if you’re resourceful enough… you might just scrape though. So I paid my money and signed on the dotted line. If you schedule your tasks and pay your fees, it’s a real thing.

The day kicks off disorderly as my friends and I had been celebrating a joint birthday the night before nearly an hours drive from our accommodations. We’d left quite late and probably ate and drank a little too much of all the wrong things. Upon arriving at the accommodations, we’d realised we’d left our breakfasts in the party fridge back at the celebrations. With a bit of booze in the system, a very short 4hr restless sleep, and no breakfast… it was showtime for Mel and I. So disorganised were we, we didn’t even have time to grab a warm coffee on the way to the start line.

The weather was a cold 35km/h southerly wind, and a few spots of rain here and there to help “freshen” up the morning was quite unwelcoming, but it’s all part of the race package. You take it on the chin, deal with it, and get on with life. We bumped into our good friend Andrew Blechynden, who also frequents the fun runs around Perth. He seemed pretty on the ball and focused. Today was going to be a good day I thought. Old school highschool hits (Korn, Limp Bizkit, Rob Zombie, Rage Against The Machine, Audioslave, etc) kicks us off the the start line nicely and into the void we went.

Perth is a beautiful city when you remove all the hustle and bustle of city life. The scenery is gorgeous at the early hours of a wet morning. I always try to find the time to listen in to the world, and take note of the majestic surrounds I encounter when I can. Appreciation is a great ally when you expect the worst is yet to come. Around the 9km marker is the iconic blue boathouse found on the river along Stirling Highway, just north of UWA. Taking a few snaps and re-entering the race I found myself in a small pack of 3 chatty runners and we all started conversing about the lead runner who was just coming back up the highway returning to the half way point (also the beginning of the race). It’s mesmerising to be at the 9km mark, and realising you’ve only done literally half of the lead runners workload (18km mark!) in the same amount of time.

The runners I had bunched up with I got to know as Roger and Angela Grattan, a brother and sister duo from Brisbane, QLD, Australia. Roger (86) I learned was currently into his 96th marathon, and Ange (87) certainly had a stack of records up her sleeve as well. She was looking strong and after a short chat, she let loose and took off ahead. Meanwhile during the, I got to know one of the nicest down to earth guys I’ve ever met.

We chatted man to man, human to human, heart to heart, about all things in life. Our histories, our goals, our experiences, our inspirations, our values… This 86 year old and I, we were like two peas of the same pod! We had so much in common. Initially, I thought I’d just sit in for a bit, listen and share a few stories, have a laugh and be on my way. I then was enjoying myself to the point where I considered running with him to the half way checkpoint and then heading into the race with a bit more pace under me. But the longer I ran with Roger, the less I cared about the race itself. I was here, he was here, we both knew we’d be finishing the race this day, but not in the style we both thought. This man has had such an extraordinary, interesting, challenging, enriched and fulfilling life and the passion to share and celebrate it all to a point where by the half way checkpoint, I’d made up my mind. Screw the -35mins off my finish time. No one REALLY cares too much about them in the long run. They’re good milestones to have in your own personal development, but a marathon is SO much more than a race. It’s an experience! A grand experience that can be a real positive one, a real negative one, but an experience none the less, and one that you’ll learn a great deal from every time you partake in it.

Roger also fessed up that throughout his extensive running and sporting history, this was the first time he had never actually physically prepared for a marathon. He’d just come down from Kalbarri with his wife after 73 weeks of travelling Australia after retiring and the schedules just didn’t really permit any hoof time prior to the race. Empathetic to his situation, I figured it’d be nice to help a brother out rather than self myself a better time that doesn’t really mean much to me, or anyone else for that matter. I could learn a lot here. I could grow. I could have a richer experience, and also give back to the community that has helped shape me these past 4 years.

Having such a deep pool of experience, I asked Roger about some of his other runs. He’s been everywhere!. He’s run marathons all around Australia, all around Europe, around the UK and even throughout the United States. He had such fantastic stories to share, including his experiences and ‘learnings’ from running in events like the New York Marathon, Disneyland Marathon and even the Boston 100th Anniversary Marathon in 1996!

A real down to earth sole with fantastic Australian values and a big love for local history, he migrated to Australia in 1953 from Ireland and touched down in Fremantle (forgive me if it’s Albany, I had ‘marathon brain’ recording these facts), who’d worked many trades and jobs, divorced twice through difficult circumstances and even re-married after claiming he was done with it. A man of 3 children who’d adopted two more, to raised a fantastically close and warm family. A man who leads by example by being the change he seeks in the world and like me, a strong believer in basic common courtesy in all things… with a light hint of chivalry!

But as much as I enjoyed his company, he also enjoyed mine. I must have gotten about 6 hugs along the way, many praises, many congratulations, a few handshakes and a big lovin’ thankyou hug at the finish line. Despite setting his all-time slowest time on record, he’d also learned a lot from me and about himself along the way. He’d learned how important pre-race conditioning to running was, even if its minor training. He believes he’d have still finish the race that day (and sure as hell he would have) but it would have been a miserable slog. And he said, he wouldn’t have changed a thing.

So in summary, I think this day was a sensational demonstration as to one of the many reasons I do these races. I’m not good at the long distance running. Never have been. I kind of loath it in many ways – The lead up evening is always an inconvenience to my social life. The starting hours suck a fat one. The weather can be miserable, and often is. The race circumstances may be unfavorable, and often are. The body not really enjoying 6 long ass hours of jogging and slowly breaking down over the course. The body aching afterwards. The body repairing for days on end afterwards. But all around it, are the gems that no one mines because no one else comes here in search for them either. Roger is one of those gems. And not just Roger, but everyone who runs in these events. My friends, Melanie and Andrew who (much to Mel’s dismay because I never see her finish as a result) are always at the finish waiting for my slow ass to finish. Seeing their happy faces with their medallions already sported as vibrantly as their smiles. These are the gems. The stories that people ask time and time again; the one’s where people live vicariously through YOUR experience because they may not have the confidence yet or the opportunities to seek these adventures out for themselves. These are the gems.

Roger now has 3 more marathons to complete before returning back to Brisbane next August for his 100th Marathon. The city where he completed his very first. He will be 87 years of age. To compliment this outstanding achievement, his wife will be joining him in running her very 1st Marathon along with his sons. There’s currently thoughts of potentially joining him, because I can think of no finer activity right now.

So Roger, thanks for making Sunday 30th August 2016 a sensational race. Good luck to you and Sandra in the future!